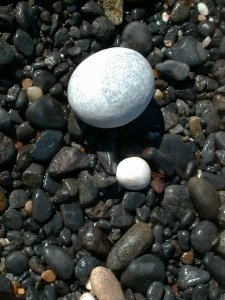 The pebble
is a perfect creature

equal to itself
mindful of its limits

filled exactly
with a pebbly meaning

its ardour and coldness
are just and full of dignity

I have been reading The Collected Poems, 1956-1998, by Zbigniew Herbert. Ed. and tr. by Alissa Valles, from Ecco Press. I have been reading Herbert for several years now, and this is a beautiful volume. Recently the review article below appeared in Poetry: it suggests that the translator and publisher ran an end-run around the poets who have been translating Herbert for the past several decades, and that in some respects Valles was not well-suited to the task of a collected poems. I am no scholar of Polish literature, but I will say that the great majority of these poems have been brought over into a simple and colloquial English that leaves me appreciative of Herbert’s genius, his ferocious insistence on a stoical moral stance toward the world, his sardonic wit, his ability to see clear through to the essence of a human situation.

Here is the link to Michael Hofmann’s review essay:

And here is an essay by Charles Simic on Herbert from the New York Review of Books that includes a number of Herbert poems:

And here are two sites with poems, information, interviews and commentaries on this remarkable poet. In the coming days I may type a couple of my favorites from the Collected Poems here as well.