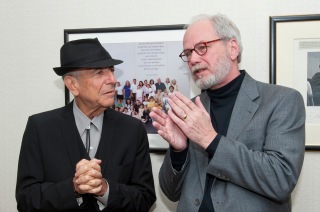 Happy 78th Birthday, Leonard Cohen!
If I remember correctly, we were talking about his friend and mentor, the poet Irving Layton, whose work I encountered as a young man at a time when I really needed it. His poems of grief and anger showed me a way forward in a dark time. And of course Cohen’s poems, which represented an alternative to the canonical modernists on the one hand and the Beats on the other, whom I found overbearing and loud. We talked a good while about poets and poetry and later about being grandfathers.
This photo was taken by Rick Friedman and belongs to the John F. Kennedy Library Foundation.
I’ve recently reread Cohen’s The Book of Mercy to see if it would still move me as it once did. It does.

(Layton’s work, admittedly older, often feels dated to me, as if arising from a cultural context, especially with regard to masculinity, that has passed.)

Look at Cohen’s hands in the photo: time and again, in The Book of Mercy, head and heart come together in just that way. I close that book not with an urge to paraphrase or otherwise talk about it, but with gratitude.